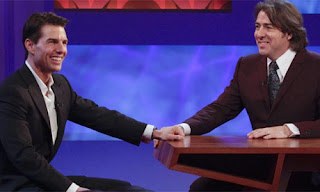 Like countless others, I made a point of watching Jonathan Ross’s return on Friday. In a silly way, it was sort of good to see him back. That feeling didn’t last long.

Don’t get me wrong, I like Jonathan Ross. His apology was genuine and heartfelt and I was pleased to hear him he say it. Good on him, I thought, you’re a decent chap.

The twobble with Jonathan Ross is that he is a totally wubbish interviewer. For a chat show host, who gets unmatched access to the biggest names on the planet, that is a pretty serious problem.

I have thought this for years and gave up watching his show yonks ago. His puerile pursuit of a cheap gag at the expense and often embarrassment of his guests is nothing short of irritating. I have seen him throw away the chance of a good interview so often it became pointless watching. He just pisses me off.

I dipped back in on Friday and it was like a flashback up there with Life On Mars. Forget the inane chats with Fry and Evans – you know they will be crass encounters – it was his hopeless talk with Tom Cruise that did it for me. Now I know Cruise is an old pro who will only give away what he wants, but that is no excuse for babbling on over him like an idiot and asking one daft closed question after another, building up to a cross examination about his farting habits. Can Ross and his researchers, producers, and writers not come up with half a dozen decent questions for a fascinating double A-list star like Cruise. If not, then why the heck do they have the keys to this show.

Ross’s career should survive his foul mouth, no problem. But it should not survive gross incompetence at the very thing he is hired to do: interview. Give this wannabe comedian £6m for a game show and be done with it. Then get a journalist in his interviewing chair. I’ve heard enough.

25 Jan 2009
Login to Rob McGibbon
Reset Password
Enter the username or e-mail you used in your profile. A password reset link will be sent to you by email.
Already have an account? Login