Who’s the Head with Hirst? 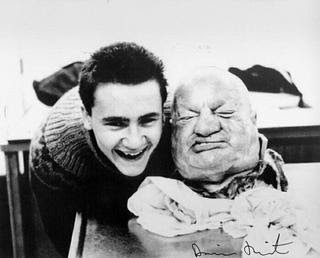 I popped along to Sotheby’s yesterday to see the Damien Hirst exhibition – I mean, pre-auction preview. It is well worth the visit. Works such as the spin paintings in “household gloss” don’t do it for me, but I admire Hirst’s showmanship and his courage. And some of the work is spectacular, not least the Golden Calf. I’d never seen his formaldehyde works up close and they are stunning. The sheer volume and projection of the entire exhibition is quite phenomenal. Sotheby’s had to reinforce the ceiling to accommodate the Calf. Its weight has forced me to reconsider buying this piece for my third floor guest bedroom.

By total fluke, Hirst passed by me as I left. With seize-the-moment chutzpah, I introduced myself. I have done a bit of this cold calling over the years and you can quickly get the measure of a celebrity by their reaction. Hirst offered a friendly handshake. He was pleasant and down to earth and looks you in the eye. We chatted for a few minutes. He lives a hundred yards or so from my home. “Do you fancy doing an interview some time?” I asked. “Yeah. Could do. But it would have to be through my office.” This is standard and fare enough. He produced his Blackberry and gave me his PA’s number. “Make sure you tell her we’ve spoken.” He offered me another handshake and was on his way. Decent bloke.

One item in the sale is a painting of a photo taken of Hirst with the head of a corpse during his time at Goldsmith’s art school. My guess is that this would have been around 1982-3. Tracey Emin featured this photo in her room at the RA’s Summer Exhibition. When I saw it there, it bothered me that a photo – albeit such a dramatic one – could be regarded as “art”. But it also made me wonder: Who was that man? What was his life?

When I saw the painting of the photo yesterday, I found myself wondering the same. Clearly, I will ask my new best friend Damien if we meet again, although he won’t know. Maybe someone out there can help me find the story behind The Head with Hirst…

11 Sep 2008
Login to Rob McGibbon
Reset Password
Enter the username or e-mail you used in your profile. A password reset link will be sent to you by email.
Already have an account? Login