Arlene Phillips – What Turns Me On. Event, Mail on Sunday 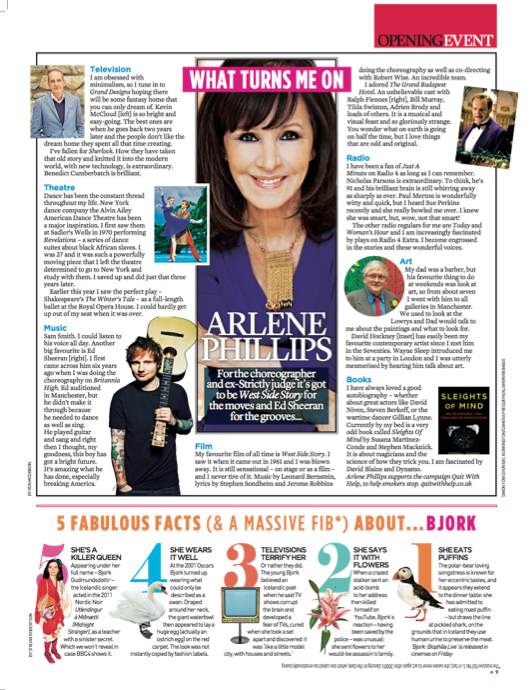 What Turns Me On – Arlene Phillips – Uncut

The dance judge and choreographer needs the soothing sounds of Ed Sheeran, the joyful steps of West Side Story, radio plays and the secrets of magic.

I am obsessed with minimalism, so I tune in to Grand Designs hoping there will be some fantasy home that you can only dream of. I really like Kevin McCloud – he is so bright and easy going – and I love the way the programme is set up. You always think the people are going to run out of money and never get to the end of the project, so there is an element of drama that draws you in and keep you watching. The best ones are when Kevin goes back two years later and the people don’t even like the dream home they spent all that time creating. I always find that quite fascinating. My home in North London is pretty bare. It’s a 1930s house, which I had gutted and re-styled. It wasn’t exactly on a Grand Designs scale, but it was a big enough job. Now, the house is all white walls and simple stone or wood floors, with very little furniture and no clutter. If I had my way I would live in a glass box!

I have been reading Agatha Christie books for as long as I can remember, so Poirot and Miss Marple have been enjoyable evergreens in my TV viewing since they started in the 1980s. They’re wonderful, harmless escapism. I like getting my teeth into a good mystery and I prefer one that is all wrapped up in a couple of hours. I am relieved to see how loyal the shows are to the books. The characterisations are spot on and I love the locations, the homes and the costumes. More recently, I have fallen for Sherlock. How they have taken that old story and knitted it into the modern world, with all its new technology, is quite extraordinary. Benedict Cumberbatch is absolutely brilliant.

Dance has been the constant thread throughout my life. In one way or another it has always been there and led me through the maze. A New York dance company called the Alvin Ailey American Dance Theatre has been a major inspiration in my career. I first saw them at Sadler’s Wells in 1970 performing Revelations – a series of dance suites about black African slaves. I was 27 at the time and it was such a powerfully moving piece that I left the theatre determined to go to New York and study with them. I saved up and did just that three years later. I used to see them dance regularly at Sadler’s Wells and I was always in the standing area at the back because that was all I could afford. They didn’t perform in London for many years, but I caught them at the London Coliseum two years ago and they are still fantastic.

Earlier this year I saw the perfect play – Shakespeare’s The Winter’s Tale – as a full-length ballet at the Royal Opera House and it was outstanding. I have always wondered how you could ever put a play as wordy as that into dance, with absolutely no dialogue, but it certainly succeeded. Christopher Wheeldon’s choreography was stunning and Ed Watson as Leontes was magnificent. It was the ultimate performance in a dance drama and I could hardly get up out of my seat when it was over.

When it comes to contemporary music, I’m really into Sam Smith. I could listen to his voice all day – it is so beautiful that I get lost in it. Another big favourite is Ed Sheeran. Funnily enough, I first came across him six years ago when I was doing the choreography on the ITV series Britannia High. Ed auditioned in Manchester, but he didn’t make it through because he needed to dance as well as sing. He played guitar and sang and right then I thought, My Goodness, this boy has got a bright future. His lyrics are very clever and I love the way he makes a story about everyday things, like in his song Lego House, which sets off a whole story in my head. It’s amazing what he has achieved, particularly in America, which is so hard to break.

Bizarrely, I generally listen to contemporary music on my computer at my desk because I see it as a part of my work. There’s a reason and a purpose to my listening, so I like to delve further into the words and understand how the music is constructed. When I am just pottering about the house I will have classical music on in the background and Mozart is a big love.

My favourite film of all-time is West Side Story. It is Romeo and Juliet taken to the limits on modern day streets with racial tensions and clashes. I first saw it when it came out in 1961 and I was blown away. It is still sensational – on stage or as a film – and I never tire of it. You have music by Leonard Bernstein, lyrics by Stephen Sondheim and Jerome Robbins doing the choreography as well as co-directing with Robert Wise. I think Robbins was the guiding light, but you just pay homage to such an incredible team.

The film I have adored recently is The Grand Hotel Budapest. It has an unbelievable cast with the likes of Ralph Fiennes, Bill Murray, Tilda Swinton, Adrien Brody and loads of others. It is a musical and visual feast and so gloriously strange. You wonder what on earth is going on half the time, but I love things that are odd and original. I was carried away by it and I still listen to the soundtrack a lot.

I have been an avid fan of Just a Minute! on Radio 4 for as long as I can remember. Nicholas Parsons is extraordinary. To think, he’s 91 [on Oct 10th] and his brilliant brain is still whirring away as sharply as ever. He is such an amazing example for anyone worried about getting old. Paul Merton is wonderfully witty and quick, but I heard Sue Perkins recently and she really bowled me over. I knew she was smart, but, Wow, not that smart! After the show, I often test myself by picking a subject at random, then trying to talk for a minute on it. I sit there, by myself, talking against the clock. If anyone saw me, they’d think I had finally lost the plot!

The other staple radio regulars for me are the Today programme and Woman’s Hour and lately I have become quite fascinated by plays on 4Extra. I switch it on while I am cooking early in the evening and I become engrossed in the stories and these wonderful voices coming from the radio. It is like lighting a deliciously scented candle and letting the balm waft around the kitchen. The only problem is that I frequently don’t stick with it to the end of the play, so I have countless unfinished plays in my head!

My dad was a barber, but his favourite thing to do at weekends was looking at art, so from about seven onwards I went with him to all galleries in Manchester all the time. We used to look at the Lowrys and dad would talk to me about the paintings and what to look for. The other person who taught me a lot about art is Andrew Lloyd Webber. I have known Andrew for years and he introduced me about the Pre-Raphaelites. He has a wonderful collection and his knowledge is incredible. He taught me so much about Burne-Jones and Rossetti and how Jane Morris – the wife of William Morris – became their muse. I have plenty of books on that period. That group of artists is endlessly fascinating – especially when you have someone like Andrew talking about it.

David Hockney has easily been my favourite contemporary artist since I met him in the mid-1970s. Wayne Sleep introduced me to him at a party in London and I was utterly mesmerised by hearing him talk about art. I remember him being excited about some new pens with brushes that he had just brought back from Japan. He was always looking for new ways in which to create his work – and he still is. I have gone to every one of his exhibitions in London since then, including the Blue Guitar series. I particularly loved The Bigger Picture exhibition at the Royal Academy in 2012. Those huge paintings of the woods in Yorkshire through the seasons were stunning. The colours, the leaves, the bare trees, the paths, I found it all so captivating. His energy and the way he keeps adapting is quite amazing.

Throughout my childhood, from as young as eight, I was consumed with books about relationships and families. I would wrap myself up in the characters of Little Women, Anne of Green Gables and Ballet Shoes. It was as if what they went through would begin to live inside me. There was often a lack of harmony in their families and their relationships and I connected with the girls who had ambitions and the courage to find their own way, whether it be to marry, to be an engineer and get educated, or to dance. I was somebody who wanted to fight against the odds to be a dancer.

I have always loved a good autobiography and I’ll consume them rapidly, whether they’re by great actors like David Niven and Steven Berkoff, or the marvellous wartime dancer Gillian Lynne. Currently by my bed is a very odd book called Sleights of Mind by Susana Martinez-Conde and Stephen L. Macknick, who are American neuroscience professors. It is about magicians and it reveals the science of how they trick your mind. I am fascinated by magicians like David Blaine and Dynamo and how they convince you they have made something disappear, even though you know it is not possible. This book explains how the brain works and how the illusionists change it to make you believe what they want you to believe. It is an entertaining book, but it’s also quite educational because it gives wannabe magicians like me a close-up on the secrets of magic.

Arlene Phillips is supporting Quit With Help, a campaign to help smokers stop for good. For a free quit plan visit www.quitwithhelp.co.uk.

12 Oct 2014
Login to Rob McGibbon
Reset Password
Enter the username or e-mail you used in your profile. A password reset link will be sent to you by email.
Already have an account? Login