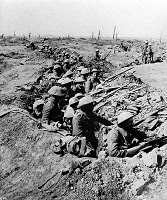 Still socially gated, with the advanced stages of cabin fever taking grip, I decided to cheer myself up and get a count-my-blessings reality check by watching Channel 4’s The Somme. It was all the things you hoped for and dreaded. I’m not sure it actually taught me anything new. I’ve read a bit about WW1 over the years and dip into the war poets frequently. A few lines from them take you there with a jolt. This show was another one of those good reminders. It was moving, gruesome, at times heart-wrenching and, naturally, it made me feel lucky to be on a sofa with a slight ankle injury and an organic beer in my hand, not a rifle and trench foot with someone about to blow a whistle to signify my imminent execution.

The re-enactments were skilfully filmed and the detail of the research of the personal stories particularly, as well as the military overview itself, was admirable. Such was the detail that the programme – coming in at two hours, five minutes – seemed to last as long as the battle itself. At times, I thought I wasn’t going to make it to the end either.

A couple of observations: How can you spend all that time building up the stories of characters and then dismiss their ultimate destinies in a picture caption? Young “Cyril” was one of 27 out of 1,000 who survived in his attack zone and went on to become a “communist”. Blimey, that begged a few more pars. And Captain May asked a fellow soldier to look out for his beloved “wife and baby”. If we know that much detail, surely the researchers can tell us what happened to his good lady and child?

But the coup de grace whinge for me is this: as the credits rolled and the horrific collage swilled in my disturbed mind, the syrupy tones of the Channel 4 voice-over woman suddenly broke the dark spell. “We apologise for any bad language that featured in this programme.” WHAT! Give me fucking strength, you stupid twats. Whoever makes rules that state these pathetic apologies must be made at the end of documentaries of such power should be put up against a wall and shot.