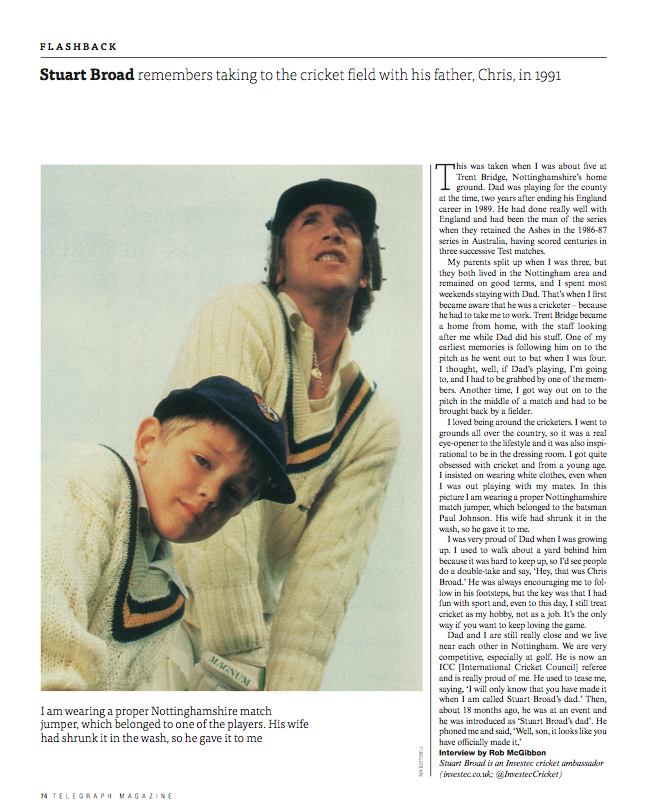 Stuart Broad remembers hanging out at cricket grounds with his dad, England opening batsman Chris, in 1991

This was taken when I was about five at Trent Bridge – Nottinghamshire Cricket Club’s home ground. Dad was playing for them at the time, two years after ending his England career in 1989. He had done really well with England and had been the Man of the Series when they retained The Ashes in the 1986-87 series in Australia after scoring centuries in three successive test matches.

My Mum and Dad split up when I was three, but they both lived in the Nottingham area and remained on good terms, so I spent most weekends staying with him. That’s when I first became aware Dad was a cricketer – because he had to take me to work! Trent Bridge became like a home from home with the staff looking after me while Dad did his stuff. One of my earliest memories is following him onto the pitch as he went out to bat when I was four. I thought, well if Dad’s playing, I’m going too, and I had to be grabbed by one of the members. Another time, I got way out onto the pitch in the middle of a match and had to be brought back by a fielder.

They were great times for me because I loved being around the cricketers. I went to grounds all over the country, so it was a real eye opener to the lifestyle and it was also inspirational to be in the dressing room. I got to hear all the match talk and the banter and I was allowed to mess around with the kit. I got to try on pads and gloves and play with grown-up bats. I got quite obsessed with cricket and from a young age I insisted on wearing white clothes, even when I was out playing with my mates. It was a nightmare for my Mum when it came to the washing! In this picture I am wearing a proper Nottinghamshire match jumper, which belonged to a batsman called Paul Johnson. His wife had shrunk it in the wash and because he was only 5ft 4in it nearly fitted me, so he gave it to me. That was my first bit of professional kit, so I absolutely loved that jumper!

Generally on match days, I only watched Dad bat for a bit, then I’d go off playing sport with other kids whose dads were in the teams. I remember us often using a large rubbish bin that was taller than me as stumps. And when I was seven I was playing rugby during a match at Bristol – when Dad was playing for Gloucestershire – and I broke my collarbone in a tackle. He was fielding at the time, so someone had to dash out to tell him that I was being rushed to hospital. He came off later to find me with my arm in a sling.

I was very proud of Dad when I was growing up. I used to walk about a yard behind him because it is hard to keep up with an adult’s stride when you’re a kid, so I’d see people do a double-take and say, “Hey, that was Chris Broad!” It was weird hearing people whisper about my Dad, but that’s when I knew he was sort of famous and had been successful. He was always encouraging about me following in his footsteps, but neither him, nor Mum were at all pushy. The key for them was that I had fun with sport and, even to this day, I still treat cricket as my hobby, not as a job. It’s the only way if you want to keep loving the game.

Dad and I are still really close and we live near each other in Nottingham. We enjoy sharing good dinners and nice wine, but we are really competitive, especially at golf. He is now an ICC (International Cricket Council) referee and is really proud of what I am achieving in cricket. All my life I have been called Chris Broad, but it has never bothered me. When I was starting out, kids would come up and ask, “Can I have your autograph, Chris?” and I’d say, “Of course. Do you want me to sign it Chris – or Stuart?!”

The name confusion has been a running joke between me and Dad. He used to tease me by saying, “I will only know that you have made it when I am called Stuart Broad’s dad!” Then, about 18 months ago, he was at a dinner event and he was introduced as “Stuart Broad’s dad”. It gave him a real buzz and he phoned to tell me what had happened. He said, “Well, son, it looks like you have officially made it!”

08 Aug 2015
Login to Rob McGibbon
Reset Password
Enter the username or e-mail you used in your profile. A password reset link will be sent to you by email.
Already have an account? Login