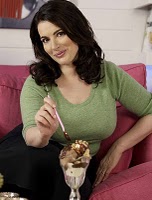 I had just rustled up a vegetarian shepherd’s pie, then failed to answer the closing questions on University Challenge, when up popped Nigella. At times, I wonder what onyx stone I have been living under because the entire Nigella Goddess phenomena-thingy pretty much passed me by, but suddenly here she was, in super nauseating close up, super glammed-up, and oh-so-super, super-sized in her super home.

Really, this programme had me spluttering on my lentils from start to finish. It was an unexpected, unintentional comedy gem. I found myself waiting for Nigella to suddenly double up over her spare tyre with laughter as the camera pulled back to reveal Richard Curtis, script in hand, directing a Comic Relief special. It is beyond parody.

Nigella, oh-so-busy, oh-so-stressed, hopping into a black taxi to the Waitrose in Belgravia, then back in a taxi to her hellish Eton Square home, then cooking frantically in her Mayfair restaurant-spec kitchen for her family and chums. I’m sure the stress of the taxi trips resonated with all those who struggle on the bus to the local Lidl with ten quid to feed five.

But it was Nigella’s menu that had me tickling the belly lard with mirth. Pork chops fried in oil with a double cream mustard sauce and gnocchi, or deep fried calamari with garlic mayonnaise. The gut-busting coupe de grace was Nigella coming home to twinkling Christmas lights after a liver full of champers, to curl up in bed with a couple of stale croissants baked in cream and egg. And, then, she came back for more with EXTRA cream before settling down for a late night heart attack. Hilarious. Rename this show ‘Nigella’s Express Taxi Route To Becoming A Fat Knacker’.

Another fat knacker turned up in ITV’s Hell’s Kitchen – Mark Peter White from Leeds, aka Marco Pierre White. Marco kept going on about the fact that he hadn’t been in a kitchen for seven and a half years. By the size of him, he couldn’t have been far from one. If anything, he looks like he’s spent the best part of his resting years on a park bench, or in a box on the Embankment. Marco sounds addled and looks so poorly he can only be a packet of fags or a Nigella pudding away from a defibrillator.

I presume the intention behind such a “Legend” doing this crass – and, it has to be confessed, pathetically addictive show – is to re-heat the souffle of his former glory. Well, by the sight of this opener, it ain’t gonna rise an inch. Would your taste buds get wet at the thought of Marco sweating and wheezing over your grub, his infested hair swooshing around while he man-handles it all with his grubby savaloy fingers? (I never realised just how much grease-ball chefs handle the food until these shows. Urgh).

Oddly enough, Marco didn’t come across as the beast that everyone at ITV expects, indeed insists. If anything, he seemed nervous and genuinely encouraging and avuncular to his hapless “celebrities”, rather than truly nasty like Ramsay. Maybe this genuine nicer side of him will gradually come across more and save his bacon.

But there is only one way to beef up Hell’s Kitchen and make it a dish worth serving: bring in Nigella.

Note: Since writing this blog, it has been revealed that Nigella’s home shots are a big fat porky pie and actually filmed in a studio in South London.