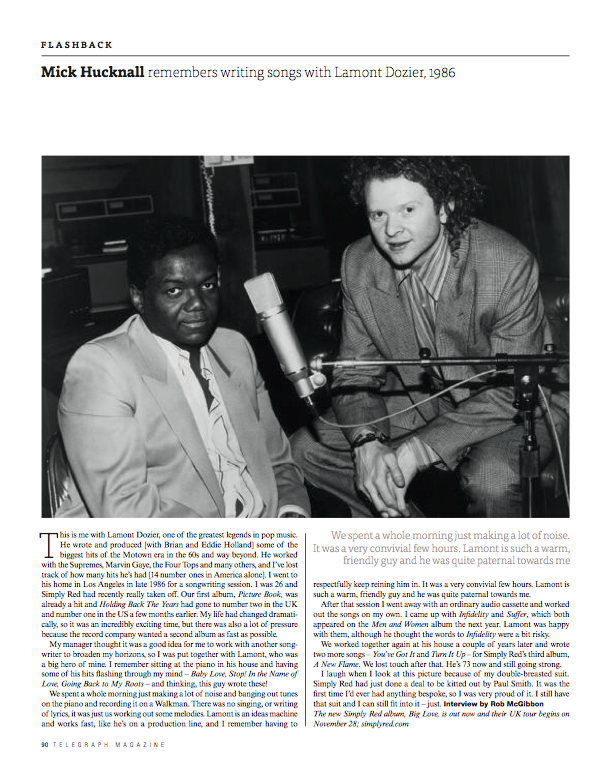 “That Paul Smith suit was the first time I had anything made for me bespoke. I’ve still got it and I can get into it – just!”

This is me with Lamont Dozier, one of the greatest legends in pop music. He wrote and produced [with Brian and Eddie Holland] some of the biggest hits of the Motown era in the Sixties and way beyond. He worked with The Supremes, Marvin Gaye, The Four Tops and many others and I’ve lost track of how many hits he’s had [14 No.1s in America alone]. I went to his home in Los Angeles in late 1986 for a songwriting session. I was 26 at the time and Simply Red had recently really taken off. Our first album Picture Book was already a hit and Holding Back The Years had gone to No.2 in the UK and No.1 in America a few months earlier. My life had changed dramatically, so it was an incredibly exciting time, but there was also a lot of pressure because the record company wanted a second album as fast as possible.

There was a big rush on, but there wasn’t anyone else in the band who could write to my standard, so the responsibility fell to me. It was a major burden, which was made worse because we were touring the whole time. I have always liked writing at home in my own time, so it was tough to suddenly write on the road, in hotels or on planes, when everything was always so hectic.

My manager thought it was a good idea for me to work with another songwriter to broaden my horizons, so I was put together with Lamont. I have been a Motown fan since I was a kid and I’m an aficionado. I have most of the Early and Mid catalogue on vinyl, so I knew Lamont’s work and he was a big hero. I remember sitting at the piano in his house and having some of his hits flashing through my mind – Baby Love, Stop! In The Name of Love, Going Back To My roots – and thinking, This guy wrote these!

We spent a whole morning just making a lot of noise and banging out tunes on the piano and recording it on a Walkman. There was no singing, or writing of lyrics, it was just us working out some melodies. Lamont is an ideas machine and works fast, like he’s on a production line, and I remember having to respectfully keep reining him in. I would still be trying to get the first part of a song right when he’d be on the chorus, or at the end!

It was a very convivial few hours. Lamont is such a warm, friendly guy and he was quite paternal towards me. A lot of writers from his time got ripped off, so he told me to stay sharp and not allow myself to be exploited. Advice from someone like him was a great help and over the years I became a bit of a Rottweiler to make sure I got what was rightfully mine.

After that session I went away with an ordinary audio cassette and worked out the songs on my own. Eventually I came up with Infidelity and Suffer, which both appeared on the Men and Women album the following year. Lamont was happy with them, although he thought the words to Infidelity were a bit risky – but I was just writing about how things were for me at the time!

We worked together again at his house a couple of years later and wrote two more songs – You’ve Got It and Turn It Up – for Simply Red’s third album, A New Flame. We lost touch after that, but I remember bumping into him at a wedding in the 90s and we talked about writing again together. He’s 73 now and still going strong. What he has achieved is really amazing.

I laugh when I look at this picture because of my double-breasted suit. Simply Red had just done a deal to be kitted out by Paul Smith. We were all measured up at his shop in Covent Garden and Paul made me this one for me in Prince of Wales check with a beautiful red lining. It was the first time I’d ever had anything bespoke, so it was a thrill and I was very proud of it. In fact, I still have that suit and I can still fit into it – just! Interview by Rob McGibbon

The new Simply Red album Big Love is out now and their UK tour begins on 28th November. Visit www.simplyred.com.

12 Sep 2015
Login to Rob McGibbon
Reset Password
Enter the username or e-mail you used in your profile. A password reset link will be sent to you by email.
Already have an account? Login