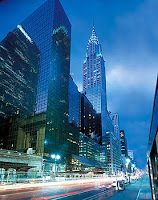 Thankfully, for this interview job (pop group Duran Duran), I was switched at the last minute from the Hell Inn in Harlem to the Grand Hyatt on Park Avenue at Grand Central. I think it was by way of an apology for the Jalfreizi Jet. Things didn’t start well.

I got out of my yellow cab, disorientated and feeling slightly sick after a brake, accelerate, honk horn, neck-jarring ride from JFK through the rush hour. The driver was straight from Central Casting’s “surly, grunting oaf” category. I sat there wondering if I had the bottle to commit the sin of sins in New York and not tip the taxi man [20% meant an extra $10. All non-recouperable]. It is easier to walk by a starving blind mother with her three maimed children on the pavement than get out of a cab without tipping, but I did indeed have the nerve and experienced what can only have been instant karma, Big Apple-style.

He dumped me about ten feet from the curb. A doorman arrived, one palm naturally wide open. I alighted, cases in hand, and stepped on an uneven tarmac patch by a manhole and immediately went over on my left ankle. I am not talking just a wobble and stagger. I mean, right over, ligament stretching over. Screeching agony over. “FUCK!” I shouted at the top of my voice, trying to maintain my balance. “FUCK!” “FUUUUUCK!” Pain ripped through me. I looked up and there were about 30 people standing on the side walk staring at me. Not one person offered to help or smiled in sympathy. Welcome. The doorman heard my accent and sensed there was no money in injured British people, so he ignored me, too.

The one upside to this injury: the agony instantly cured my toothache.

The Grand Hyatt. Not a bad hotel, in a business-travel sort of functional way. I think it has had a major refit in recent times and I’m told that Hyatts generally have upped their game. The lobby of this one is a hideous landfill of brown marble with an absurdly large water feature-cum-fountain dominating the entire atrium. The rooms are spacious and clean and the beds are vast kings with decent pillows and soft linen. The woman on the reservations desk had no idea I was now operating on one leg but, by fluke, she gave me a room for the disabled. The bathroom was a wet room, ie: no bath, just an open space beneath the shower. I was desperate for a long, soothing bath but I was in so much pain I could not face the hassle of moving. I learnt later that the tiler hadn’t bothered putting a gradient in the floor tiles because my shower flooded the bathroom. He probably got tipped well for the shoddy work though. I built a dam by rolling long white towels and immediately felt bad about the enviroment and all that extra detergent going into the oceans. It’s Room 2740 that is liable to flooding, if anyone is interested. I would hate for anyone to aquaplane out of the 27th floor in their wheelchair.

What more can I say about the Grand Hyatt: $299 per night plus taxes totalling $44.40 is pretty good value for central Manhatttan. Naturally, like all hotels, they totally fleece you for using the telephone, but the breakfasts are good [$32, plus tip – even though it is a self-service buffet. Explain that]. I could go on, but if I write any more, I’ll be looking for a little friendly bonus…