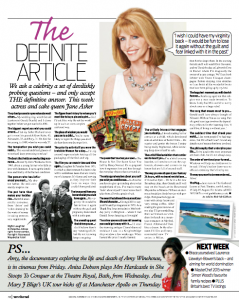 Click image to see how the article appeared in Weekend magazine

‘I wish I could have my virginity back, it would be fun to lose it again – without all that guilt!’

We ask a celebrity a set of devilishly probing questions – and only accept THE definitive answer. This week: actress and cake queen Jane Asher

The prized possession you value above all others...My wedding ring, which Gerald [cartoonist Gerald Scarfe] and I chose together before we got married in 1981.

The biggest regret you wish you could amend...That my father Richard never got to meet his grandchildren Katie, 40, Alexander, 33, and Rory, 31. He died far too young, in 1969, when he was only 57.

The temptation you wish you could resist...The second and third glasses of wine that I keep promising to refuse!

The book that holds an everlasting resonance...Stoner by John Williams from 1965, about a young farmer who falls in love with literature. It sums up the loneliness and frailty of the human condition.

The person who has influenced you most...My doctor father. He still constantly inspires me.

The pet hate that makes your hackles rise...Harmful unscientific nonsense, from ‘detox’ and ‘colon cleansing’ to the waste of money in taking unnecessary supplements.

The figure from history for whom you’d most like to buy a pie and a pint...God. I’d ask Him why He set the world up in such an over-complex and cruel way.

The piece of wisdom you would pass on to a child...You’re more likely to regret the things you don’t do than those you do, so go for it.

The priority activity if you were the Invisible Woman for a day...I’d zip around supermarkets taking all the packaging off the fruit and veg.

The film you can watch time and time again...Laughter In Paradise from 1951, in which a joker instructs his heirs in his will to undertake tasks that are totally out of character. It’s funny and moving as they improve their lives in ways they couldn’t have predicted.

The treasured item you lost and wish you could have again...My virginity! It would be fun to lose it again without the guilt and pregnancy fears linked with it in the past.

The unending quest that drives you on...I don’t believe there’s any ‘meaning of life’, but the not knowing keeps one going.

The poem that touches your soul...The House Is Not The Same Since You Left by Henry Normal. It’s so poignant how it expresses love and loss through the everyday objects that surround us.

The misapprehension about yourself you wish you could erase...In showbiz you have to give up minding about what people think of you. I’ve read so many ‘facts’ about myself I never knew that I take them all with a pinch of salt.

The event that altered the course of your life and character...Giving £100 to support Private Eye magazine in 1970. As a Thank You I was invited to its 10th birthday party in Brighton – where I met Gerald. It was fancying at first sight!

The crime you would commit knowing you could get away with it...I’d steal the stunning antique Chanel diamond necklace I saw in a Knightsbridge shop window a few weeks ago. When I asked the price I nearly fainted.

The unlikely interest that engages your curiosity...I loved reading horror comics as a child, which developed into an adult love of horror films – the scarier and gorier the better. I enjoy being really frightened, while knowing deep down that I’m safe.

The unfulfilled ambition that continues to haunt you...I’m a bit of a messy hoarder, so I need to sort out the cupboards, drawers and corners in my house that are full of unused stuff.

The way you would spend your fantasy 24 hours, with no travel restrictions...It’ll start at 8pm – I’ll be in a hit new Broadway play, then Gerald and I will stay on the beach at the Rosewood Mayakoba hotel in Mexico. I’ll have an enormous breakfast: fresh berries with porridge, then poached eggs on toast with crispy bacon and very strong coffee. After reading the great reviews of my play I’ll go snorkelling, then we’ll meet our children for lunch in a mountain restaurant in Meribel, France. Afterwards I’ll ski like a dream. In the afternoon I’ll film an Emmy-nominated new TV series in Milan, then hit the shops there. In the evening Gerald and I will watch Don Giovanni, and we’ll end the day at Lulworth Cove in Dorset where I’m magically the owner of a cute cottage. We’ll eat fresh lobster with Veuve Clicquot champagne. Before sleeping, time stretches so I can finish all the wonderful books that have been piling up by my bed.

The happiest moment you will cherish forever...Realising aged ten that religion was a man-made invention. To know I only had this world to worry about came as a huge relief.

The song that means most to you...Gerald and I have always thought of Nilsson’s Without You as our song. Part of a good marriage involves the dependency reflected in the haunting line, ‘I can’t live, if living is without you…’

The saddest time that shook your world...Like most people I’ve had tragedies, but I’m afraid I can’t reveal any details out of respect for those involved.

The philosophy that underpins your life...To be kind is the most important attribute of all, but it’s not always easy.

The order of service at your funeral...Whatever will help my children not to be sad. If they’d rather there was no official ceremony that’s fine by me.

The way you want to be remembered...Alive!

30 Jun 2015
Login to Rob McGibbon
Reset Password
Enter the username or e-mail you used in your profile. A password reset link will be sent to you by email.
Already have an account? Login