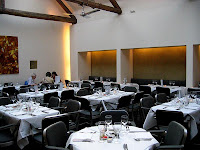 A simple, quick tip on a fabulous restaurant I visited last Friday: Baltic. It’s been there for about six years and already has a huge following and great reviews, but has only just beeped onto my radar. Always up to speed, me. (Apparently, AA Gill slagged it originally, but has been seen back there many times).

The theme of the restaurant is Eastern European and has the most amazing, mouthwatering original menu. If I only I could remember the names of the dishes to make your mouth water. The trouble is, the tradition at Baltic is to serve a variety of head-banging home-made vodkas throughout your meal. Slam dunk those on top of some superb Meursault, Margaux and a Brunello to boot, then you know you will have to relive the experience just to anchor it properly in your memory.

That said, the Scottish Rock Oysters (er, is Scotland near the Baltic?) were silver slick, the Siberian dumplings with veal and pork were sweet and moreish and the bleeding lamb was so tender I started stamping the ground like thumper. For the life of me I cannot remember what I had for dessert. I blame the pre-pudding strawberry vodka.

Note: I have just noticed that Baltic has made into the Evening Standard’s restaurant critic Fay Maschler’s top 25 London restaurants in today’s (3rd Oct) paper.